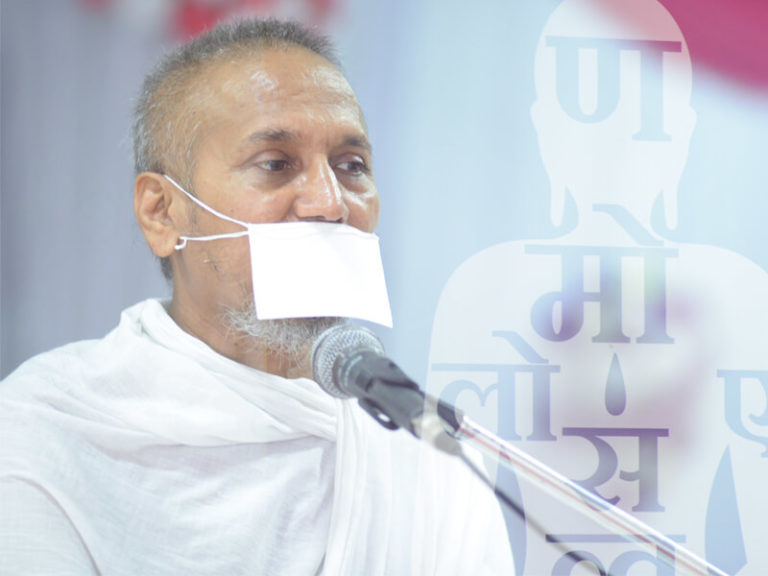 Among the charismatic and influential Jain monks of today, Upadhyay Shri Rishi Praveen is held in high regard and esteem. Upadhyaya Shree was born to pious mother Smt. Champabai Desarda and devout father Shri Dagdulalji Desarda on 7th October 1957 in Loni Factory (Ahmednagar, Maharastra). A prime example of how great men are formed not just through formal schooling, Shree Praveen Rishiji studied up to class X and had always been inclined towards deeper religious philosophies. Over time, his interest in Dharma grew manifold and changed into detachment from matters of the world. At only 16 years of age, he accepted the vows of a Jain Monk (Diksha) at the lotus feet of Acharya Shree Anandrishiji of the Shraman Sangh on 24th March 1974 at Bhusaval (Khandesh, Maharashtra).

As he started treading on this noble path (Sanyam), he set most of his time towards Gurubhakti and study of the Aagams. He spent 18 years under the mentorship of Acharya Shre Anand Rishiji studying the Jain Aagams in great detail. He served his Guru as the epitome of dedication and devotion. His inquisitive nature shaped him into a multifaceted personality. This is perhaps why his sermons attract listeners from all walks of life. Praveen Rishiji is known to transform the orthodox and superstitious mindset of society with his logical observations. A person only has to listen to one of his sermons to become an ardent follower.

In order to solidify the clay of knowledge in the kiln of meditation, Shri Pravin Rishiji practised Divine Sadhana in the solitude of the forests near Indore (Madhya Pradesh). Taking note of his vast knowledge and Sadhana, Acharya Shree Dr. Shivmuniji (4th Patdhar of the Shraman Sangh) bestowed him with the title of Upadhyaya in 2004. Through his wise words, he has motivated people in Maharashtra, Madhya Pradesh, Rajasthan, Delhi, Uttar Pradesh, Haryana, Punjab, Andhra Pradesh, Tamil Nadu and Karnataka. He traverses 2000 – 2500 km a year on foot in order to propagate the words of Prabhu Mahaveer.

Through his unique narrative style, Upadhyay Shri Rishi Praveen is perhaps the first monk to bring alive the life-story and messages of Tirthankara Mahaveer in the form of the Mahaveer Gatha since 1992. He guides us along the journey of the Trithankara’s life with such deep intensity that listeners feel as if transported to the same timeline. Along the same lines, the Uttaradhyayan Sutra– Mahaveer’s last sermons- are narrated by him with much enchantment making the experience one-of-its-kind. Through such endeavours, he has ignited a feeling of divine faith in countless hearts.

Though based on scripture and tradition, all his programs cater to the needs of, and seek to positively transform the modern society. To this end, he has struck a balance between tradition and modernity, between religion and science, between theory and practice. His initiatives- Navkar Kalash and Gautam Nidhi– are continuously changing the face of society. His sermons on Karma Siddhanth (Secrets of Karma) highlight the depth of his knowledge. Similarly, he has presented a new approach to the traditional Samayik, Pratikraman, Tapasya and Dhyan.

Upadhyaya Shree’s roster of endeavours to inspire spiritual change are increasing by the year. Wherever he notices darkness, superstition, confusion or deficiency in the familial, societal or dharmic spheres- he brings brightness through the flashlight of a workshop or programme. Through his Shivirs, he has touched the lives of people from all strata of society regardless of age, interest or gender. These include Discover Yourself, Happy Married Life, Happy Home, Arham Garbh Sadhana, Arham Dharna, Arham Parenting, Arham Purushakar and Ashtamangal Dhyan Sadhana among others. Each and every program provides for holistic growth of the learner.

Among these, Arham Purushakar Meditation is a simple, easy to follow, unique and universal meditation technique revived from the Aagams by Upadhyay Shri Rishi Praveen. This Sadhana comprises colour therapy, mantra therapy and form therapy. It assists in opening up one’s inner vision thereby facilitating internal transformation and self-purification, leading one on the path of divine self-realisation.